Fly Fishing in Slovenia is like a dream! Slovenia is one of the best destinations in the world for fly fishing holidays:

Our independent fishing travel company is located on the small alpine town of Tolmin at the head of the soca valley, next to the spectacular Triglav National Park, which is surrounded by the best Alpine Slovenian rivers for fishing Brown Trout, Rainbow Trout, Marble Trout, Brook Trout, Danube Salmon and Adriatic Grayling.

We are a local fishing guide family business focused on the Alps destination that specialised in the development of the most professional and careful operation of fly fishing in Slovenia. From our fly fishing lodge in Tolmin we have access within a maximum radius of one hour to many of the most spectacular crystal-clear rivers in the world: Soča, Lepena, Idrijca, Sava Bohinjka, Radovna, Kokra…

Anglers on their trip to Slovenia can also enjoy its breath-taking scenery, our selected accommodation, excellent gastronomy and wines, culture and history, proximity to international airports … Our friendly team aims to make your holiday in the Slovenian Julian Alps a special experience for both anglers and companions. For this and in parallel we provide tailor-made activities from the hotel for non-fishermen: cultural visits, rafting, hiking, wine tour …

Welcome to Slovenia fly fishing, the paradise on the sunny side of the Alps!

As a licensed travel agency, tour operator and activity provider in the Alps our fly fishing trips in Slovenia include:

Overview of our operation in slovenia:

Our guided trips in Slovenia 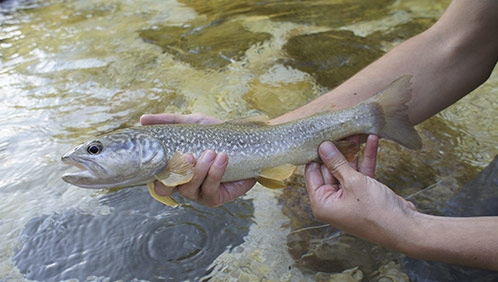 Guided Fly Fishing Trip
Base in Tolmin: The best rivers of Slovenia within a radius less than 1h. Unique and strategic location. 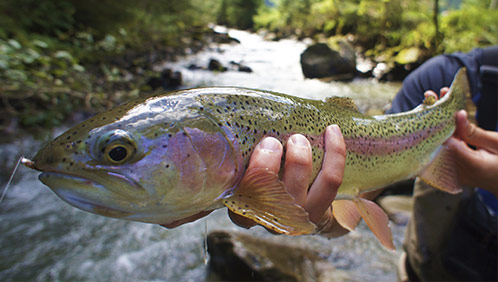 Slovenian rivers are considered some of the most spectacular in the world. The incredible management of its different fishing clubs coupled with the beauty of its waters and landscape have turned this country of the Former Yugoslavia into a real paradise for lovers of fly fishing.

To fish in Slovenian rivers a fishing license – permit is required, which is often more than 100€ and provides access to a single stretch of river and day. These fishing permits can be obtained at various hotels, gas stations, fishing shops …
Slovenian rivers possess diverse species for fishing such as Marble Trout, Brown Trout, Adriatic Grayling, Rainbow trout, Danube Salmon among others.

Our company works from a strategic point of the country from which we have access to almost all Slovenian River within a maximum radius of 1 hour and 30 minutes.

5 species that you can fish in Slovenia

In Slovenia fishermen can enjoy fishing for five different species of salmonids, some of which can be found in the same river. These species are:

Marble trout are considered by many fishermen to be one of the most mysterious fish in the world due to its curious behavior.
Marble trout are a special form of brown trout that live in the South side of the Alps in the tributaries of the Adriatic Sea. Apart from Slovenia, it can also be found in Northern Italy and Croatia.
Marble trout position themselves near riverbanks, especially those with big stones and submerged trees, in order to blend in with the riverbed. There they stay and wait patiently to catch fish. They are very territorial and aggressive fish.
Bigger marble trout remain hidden during the day and go out to hunt in deep pools at night or on days when the river waters are high and murky.
Marble trout are known for:

Two decades ago marble trout were cataloged as an endangered species. The main problems its population face are:

The problem with marble trout and brown trout crossbreeding
Several decades ago many of the rivers inhabited by trout in Slovenia were repopulated with brown trout, this began the hybridization of the native marble trout populations. Thus, in Slovenian rivers like Idrijca, Bača, Vipava, Reka and Rižana it is easy to find areas in rivers where both species coexist and crossbreed.
The hybrid trout has characteristics of both species such as the distinctive irregular scale pattern of the marble trout mixed with the red spots with white edges typical of the brown trout.
It should be noted that the marble trout cannot breed with the rainbow trout.

Salmo marmoratus, Slovenia’s greatest tourist attraction
Although the marble trout can be found in a variety of different countries, such as Italy and Croatia, it was never very popular until the Slovenian fishermen clubs expressed their concerns for this beloved fish. Nowadays, Slovenia is known all over the world for its marble trout.
The average size of the marble trout in Soča river is about 11.8 inches in the upper course and 15 inches in the middle course of the river. Every year fishermen register some Soča trout weighing 11 to 33 pounds. The largest specimen registered to date was in 1997, when fishermen caught a marble trout that measured 121 inches and weighed 55 pounds.
In 1982, a campaign to save this species was started in the Soča River and today the source of this river has a large population that continues to increase year after year.
Nowadays, local fishing clubs continue to fight to recover the salmo marmoratus population, which was facing a near extinction due to the release of brown trout into their habitat, resulting in crossbreeding. Thanks to them, people are now realizing the marble trout’s uniqueness and importance, and they have easily become the symbol for fishing in Slovenia.

What are the best months to fish in Slovenia?

Slovenia is a country filled with rivers. Few places on earth have as many rivers in such a small territory.
Slovenian rivers are located on the South side of the Julian Alps. In a country where within a 60-mile radius it is possible to go from the summit of the Triglav Mountain (‎9395 ft) to the shores of the Adriatic Sea, rivers flow fast in the mountainous landscape and slow in the plains.
Each river has a season when conditions are best for fishing. Due to the variety of Slovenian rivers and the exceptional location of our operations center, located in Tomin, we can guarantee success throughout the year, regardless of weather conditions, current and temperatures. In general, it could be said that:

Most flies hatch during April, May and June. Although in summer mayflies and caddisflies can be prominent at night.
We believe that overall April, May and beginning of June are the best months for marble trout fishing. During these months, streams flow at greater speeds making larger trout more active and easier to catch.

The best flies for fishing in Slovenia

In Slovenia, agriculture is done without insecticides or herbicides. These volatile compounds negatively affect insects. The lack of pesticides allows for a higher population of insects and intense hatching seasons which increases your chances of catching a fish.
Many different kinds of flies can be used in Slovenia. The choice will depend on the fish we want to catch, the time of the year and the type of the river. It should be noted that both American and European fly patterns work well.
In broad strokes, we recommend the following:

What is the best fishing gear to fish in Slovenia?

In Alps Fly Fish we provide you with the best fishing equipment (rods, reels, flies, waders…).
If you are bringing your own equipment these are some recommendations:

Licenses and Fishing Permits: All the Information You Need!!

In order to fish in Slovenia it is necessary to have a fishing license. You can choose out of a variety of licenses based on your timetable; one day, three days, one week, or a year. Daily licenses are issued by fishing clubs, or the administration.
In order to buy fishing licenses, it is necessary to provide the passport number and some other personal information. The cost ranges between 15 and 100 euros depending on the river you want to fish.
Each fishing permit allows you to fish in certain sections of the river, also the fishing season, fishing gear and fishing species among others are specified.
Slovenia fishing permits are obtained in some hotels, shops, gas stations and websites. Permits can be issued for one day, three days, a week or a year.

In Slovenia, the waters are managed by two types of entities.

1- FISHERIES RESEARCH INSTITUTE OF SLOVENIA.
The rivers managed by the Institute are grouped into districts.
In the following list, we name the districts. Click on the district name to follow a link to find out more information on the best fishing season, limits of the fishing district, fishing methods allowed, types of fishing licenses and fishing species.
You can also download a PDF with the map of the district:

How to buy fishing permits for Slovenia online
If you are interested in buying online fishing permits in Slovenia you can do it by going to the website of any of the previous fishing club mentioned. Many of them offer the possibility to buy the permits online.

Can a fishing guide issue fishing permits for me?
Alps Fly Fish is a travel agency which sells all-inclusive packages (hotel, fishing permits, accommodation, transfers from airports…). Unlike other companies, we take care of supplying daily permits for the best fishing areas without an added price.

Our operation center in Slovenia

In Slovenia we have selected one lodge strategically located for offer the best fishing guarantees depending of the time of year.
This operation center be found located in  Tolmin. In them you will find a familiar treatment and an excellent service.